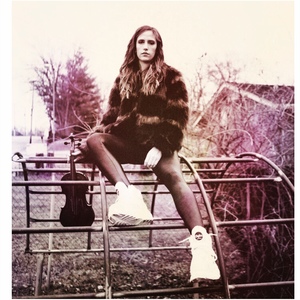 In Nashville, Alicia is privileged to play with the Nashville String Machine, Nashville Music Scoring, and Nashville Recording Orchestra’s for commercial recordings for artists and projects such as Paul McCartney, Alison Krauss, Willie Nelson, Call of Duty, and Spiderman, etc. In addition, she plays with the Nashville Symphony, performs with Intersection and Chatterbird New Music Ensembles, the Chris Walters Jazz Quintet, and in 2018, served as Artistic Director of Alias Chamber Ensemble. She is also one half of the electronic band Are We Sane with Nick Spezia.

She is is currently in the process of releasing her latest EP, A Monstrosity.

After touring the world for nearly ten years as a solo/featured violinist with Cirque du Soleil, as the lead violinist/fiddler, vocalist, pianist, and dancer with the International Violin Show Barrage, and serving as a Concertmaster/soloist on fellowship to the Tanglewood Music Center, Alicia Enstrom’s accolades stack high in the professional world of music, specifically violin.  In a world known for rigorous standards and tedious mastery of instrument and repertoire, a violinist who doesn’t always fit neatly into the conformative box of genre could be deemed, well problematic… or could she?

In such a world, if a composer is able to slide so easily from the classical violin concerto into the rhythmic punches of the fiddle – brazenly adding leaden electronic beats, grumbling synthesizers, and vocals that could exist in the realm of pop, only then to confuse the boundaries ever so slightly more with a whole-tone scale that is the stuff of jazz – the result, one can imagine, might be considered unnatural, or even monstrous.

Embracing this sentiment, Alicia Enstrom gives a parting nod to convention and unleashes her eclectic inner-beast with her latest release A Monstrosity (out September 6, 2019). Written, produced, recorded, and engineered by the artist in her Nashville home, the genre-mashing five-song EP – which begins with two, more production-heavy semi-indie pop tunes, leading into an avant-garde classical violin piece, and then into an intricate solo-violin instrumental before ending with a pop fizzle – is an exploratory exercise in a personal style that Enstrom herself has not yet completely defined.

“Is this a pop record, an indie record, a classical or electronic album?” she asks, “Or is it simply musical colors rolled up in a nice little monstrous package?”

The album’s more beat-laden lead track “Monsters,” which layers ghostly violin riffs over pop vocals, speaks to the idea that we all have thoughts in our heads one might deem monstrous, but when you truly look those monsters in the face and/or listen to them, they may not be the perceived horror we first thought, but rather the one thing that really helps set us free.

If “Monsters” represents liberation through setting the monster free, then the album’s second track and featured video-single “Half Moon” is about self-acceptance and loving ourselves in our most monstrous from – imagine if in that first moment of conscious self-awareness when Frankenstein questioned ‘what am I and from whence did I come?” if he had shrugged and answered himself, “I am at once a monstrosity and I am a work of art”.

In the song's video produced by Grant Claire (GoodNiceThanks), Enstrom (whose name is an anagram for 'monster') explores a theme of self-acceptance and achieving grace. "It’s about just floating and seeing the world from above, being content with yourself, " she says. "Here, I’ve got bubble wrap on my face. I got a moss mask, I’m doing weird movements, and you can't see my face. But the message is a 'love and accept yourself and be you in all your weirdness' kind of thing.”

“Goodnight Nebraska” is an instrumental piece that intersperses eerie classical violin loops with electronic pops and crackles to paint an aural landscape of the desolate open beauty that possesses the Midwest, in which one can reflect and see for miles. Originally from Kansas herself, Alicia was classically trained from a young age but took on an appreciation for different styles of music and a distaste for being artistically confined early on. She remembers being in middle school orchestra class and having to study the same few songs for the entire semester. To entertain herself, she would improvise, jumping up a third here or down a third there, making up certain parts from time to time.  She is thankful that for the most part, her additions were met with just a raise of the eyebrow from her teachers, who on occasion would ask to her to, ‘please just play what's on the page’.

Later, she would move to Nashville on a scholarship to Vanderbilt University, her ideal choice because it was a great classical music school, but also a place where she could explore her interest in fiddle and jazz. Here too, she was often met with the incredulousness of less adventurous contemporaries, scratching their heads at the perceived lackadaisical fluidity with which she moved between genres and styles. But Enstrom had started to think music is more interrelated than we want to say in our current categorization-happy day, insisting that musical stylings are just different vocabularies within a language or variances in use of colors to express a work of art.

Enstrom emphatically points out that Mozart and Beethoven were, first and foremost, improvisers; the music of the greatest composers endures because “they improvisationally created it, perfected it, and put it down on paper for us to interpret and recreate. We, as musicians, are so quick to jump to categorization, insisting on what is right or wrong, that we forget about music as color, artistry, and voice. These works were written in different periods with different instruments. They were improvising and creating by utilizing whatever instruments and techniques they had at the time. So, the question now is: how do we transition into a music of our day and age, to create our own narrative by experimenting with new techniques and technologies?”

For Enstrom, this means the freedom to delve into a wide array of diverse musical interests, including her love of electronic music production (she is also one half of the electronic band Are We Sane with Nick Spezia). For both recording and playing live, Alicia uses a Boss 5o5 looping pedal for the harmonic structure it provides. Though designed for tabletop use with fingertips, she operates it barefoot, routed through a Push that's hooked up through Ableton with a SoftStep, MIDI controller as well. With her streamlined setup and free form attitude, Enstrom has situated herself to maximize creative flow for self-sufficient and prolific music production. By years end, she will be releasing a full-length album, A monstEr ROARS, which was recorded utilizing “only her face and violins.” This album is produced with Jon Estes who produced her first full-length album, The Monster Speaks, and helped produce the three vocal tunes on A Monstosity. In addition, she will also be releasing her 5-part Concerto for Violin, Electronics and Orchestra based on the instrumentals of this album and orchestrated by Stephen Lamb .

“I want to exist in the classical world and to show the classical people that you can improvise, instrumentally or with electronics, and it's okay. And I want to show the pop people that you can bring in classical elements and high standards of musical playing and not be pretentious. And we can all kind of learn from each other and coexist across many musical worlds happily, peacefully, and encouraging art forward as a United front.”